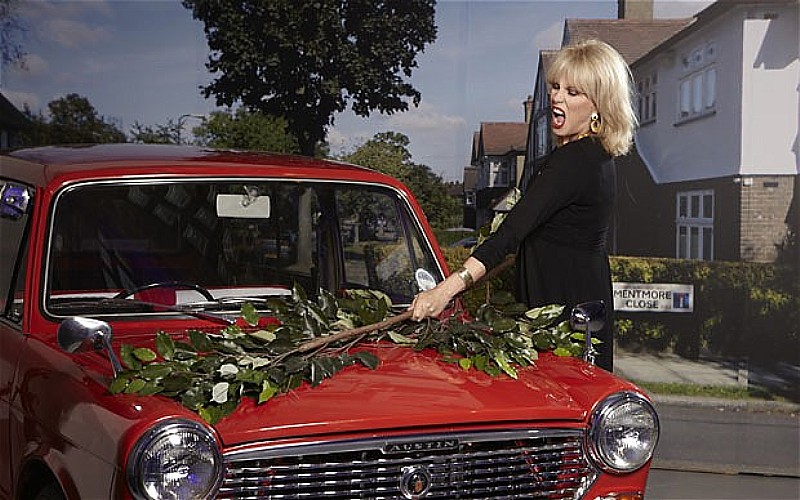 Those who know me well will be aware that few of my journeys have been on my own. I
always take along a rather special woman. Dulcet in tone, she has been my guide and my
comfort when things such as roadworks or contraflows have conspired to irritate. She has
kept me calm and relaxed over the last decade, and now she will accompany me no more.
She is in what many might see as a better place, and where nothing more can harm her.
May Joanna Lumley rest in peace.

I should probably make it clear here in the second paragraph that the real Joanna Lumley is
still very much alive and kicking. And thank God, because she is a wonderful human being
who does many good works, in and around the times she graces our television screens with
her presence. But in the mid-2000s she lent her tones to TomTom, as a downloadable voice
for satellite navigation systems. And upon buying my TomTom XXL back in 2009 I
downloaded her voice in preference to any computerised Cindy or robotised Ron. And unlike
the whimsical, I believe that when you find something you like you stick with it.

Joanna Lumley guided me around Sheffield as a rep for an engineering cutting tool
company. She brought me down to Peterborough for several magazine experience
opportunities and interviews. She led my path when I moved from Yorkshire to the Fens in
2014. And at every moment since, every corner of the country and even into Europe, she
has been by my side, whispering sweet nothings such as “You have reached your
destination, darling.”

Joanna – my electronic Joanna, not the willowy blonde septuagenarian off the telly – passed
on Sunday 1 st July, as the result of AA negligence. She was trapped in my Bentley when the
patrolman set it on fire, and couldn’t be saved from the flames. She wasn’t all I lost – my
passport, my bank card and many other more tangible things went up too – and yet
somehow she is the loss for which I feel the greatest pain. We don’t ascribe much value to
technology these days – much of it is consumer-led and designed to be replaced every few
years – but when your tech has a human voice you begin to feel a bond. And while I’ve
replaced my satnav with a brand new TomTom Via 53, it just doesn’t feel the same.

TomTom won’t allow me to install my beloved Ms Lumley onto the new device, and judging
by the TomTom forum this is a decision which has left many more distinguished than me in a
state of outrage. I’ve had to make do with John Cleese, and the joke’s already wearing thin.
Because while “Bear right… beaver left” is funny once, it becomes infinitely less funny when
you’re navigating a single track Cotswold lane in a car with low profile tyres and it’s the fifth
time you’ve heard it that morning. “No darling, turn around when possible” was always
pleasant – I would find myself taking diversions on purpose just for the gentle nudge about
my error. She always made me feel like I was dealing with a treasured companion, rather
than the mad old uncle who still thinks it’s 1943. And one of those inspires more trust than
the other.

I’m sure that over time I’ll learn to tolerate Cleese’s directions. After all, I suppose I’m stuck
with them. But I shall remember my former leading lady with fondness – and raise a glass to
the computerised companion who was absolutely fabulous.

One thought on “May the woman in my satnav rest in peace. ”